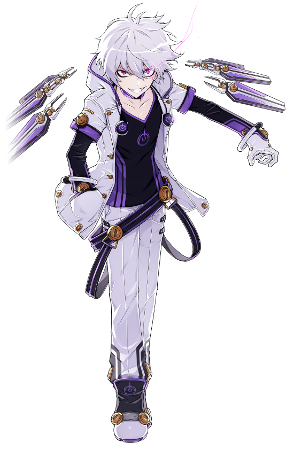 Add's parents, famed engineers and scientists, gave their son the best qualities to take with him on his journey - just like them, he is an amazing tinkerer. However, a war wiped out both his family and his home. Add, the sole survivor, fell into a fracture in the ground whilst making his escape and found himself before the gates to a gigantic library. As he saw no way of leaving this location, he began to study. His interests focused on the ancient Nasod in particular, as their technology particularly interested him, and with time, he was able to build himself machines with Nasod-like properties. When he finally managed to leave the library (thanks to his extensive studies), he realised that decades or even centuries had passed. Add then began to explore this now completely unknown world. Moulded by the years of solitude, he now searches for a way back to his own time. But first he supports Elsword's companions, in the hope that he can study Eve's code and expand on his knowledge.

These small Nasod Dynamos are surprisingly dangerous. I am happy that they are on our side. Although... if you can't play in a team then you don't belong in mine!