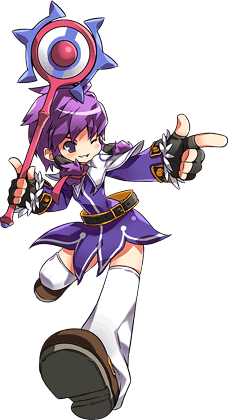 Aisha led a nomadic childhood with her grandfather, who was a wise and experienced mage. He taught Aisha the art of spell-casting, and at the tender age of 12 awarded her the title of 'Mage'. A short time later, she stumbled upon an ancient enchanted artefact which robbed her of her magical powers when she tried to use it. She searched high and low for a way to lift this terrible curse, but to no avail. Eventually, her grandfather revealed to her a crucial piece of information: 'The ring seeks a worthy bearer on which to bestow its powers. But take heed, the ring will enslave those who are too weak to control it and drain them of their powers.' Aisha has travelled far and wide since then, picking up whatever arcane lore she can and building her strength in the hope that one day she might tame the ring and regain her lost powers.

She's clever, vivacious and loves reading magic books as well as ancient ones. Once she has mastered her tendency for arrogance she will become a very wise woman.