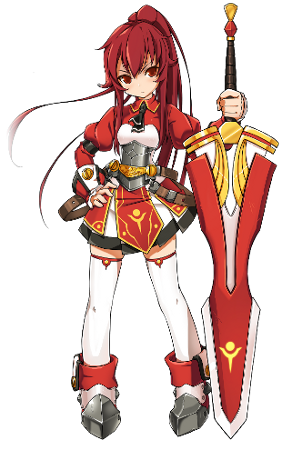 Fearless Knight with a Fiery Soul

Elesis' father personally trained his daughter in sword fighting – and he has every reason to be proud of her. Just like him, she became a Belder kingdom knight and now fights for the honour and freedom of her homeland. She carries out fast and powerful strikes using the heavy claymore sword. Yet alongside her swordsmanship, she has another skill to call her own, which she shares with Elsword: she can summon and control the power of fire. She joins Elsword's group to protect her brother and to stop the Demons once and for all.

Now I understand where Elsword gained his abilities. The ties of family are clearly not any less powerful than the programming of the Nasod. Extremely interesting.