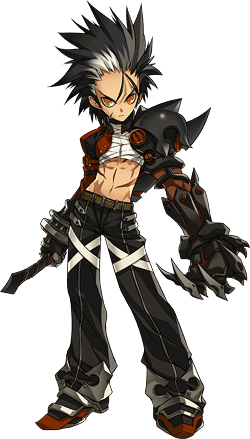 Raven was a young and ambitious warrior who quickly made a name for himself in the Mercenary Alliance. He eventually became their leader. But his best friend grew envious of his success, and spread rumours about him that destroyed Raven's reputation and put him in prison. Raven's fiancée freed him with the help of the faithful Crow Mercenaries but died in the escape attempt. Raven himself was seriously wounded and left behind, dying. In this state, he was taken to the Nasod King who replaced Raven's severed arm with Nasod components and so brought him back to life. The King hoped that Raven's fury and injured pride would make him punish humans for their actions. Raven swore an oath of fealty to the Nasod King. But a chance encounter with Elsword changed everything and rekindled his human spirit. Now they fight together against the Eldrit thieves.

Half human, half Nasod. With his Nasod hand and the sword, he can carry out devastating attacks. Sometimes he worries me but since his transformation he has never let us down.