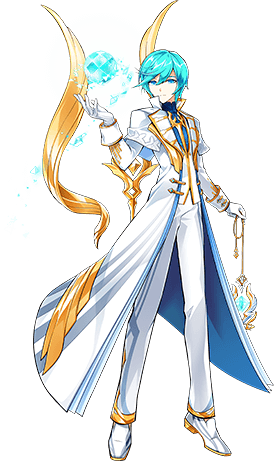 Lost in a tear between space and time – it was here that the young priest Ain found himself again as the blue EL gemstone split. He sought desperately to keep his form in this dimension between dimensions. Yet it seemed to be futile: his magic had little to no effect in this surreal place. He had almost given up, when he sensed a whisper of the might of EL. The closer he got to the source of this power, the more powerful Ain became. Finally his power reached a point where he was able to re-materialise in Elios. His original mission, bestowed to him by goddess Ishmael, could now be continued: the might of EL should bloom, just as it did before the war. With determination, Ain headed out on the hunt for the shards of the blue crystal. In Ain, Ishmael had created a handsome young man, who stands, unerring, by her side. Yet since his period spent in this torn dimension between space and time, a sinister might seemed to slumber within him. If he breaks his pendulum, the priest unleashes undreamed of powers.

I cannot shake the feeling that somebody protected me. A noble figure with the attire of a priest. I remember: it was a man, his green eyes radiant beneath his hood... Ain. That was his name!