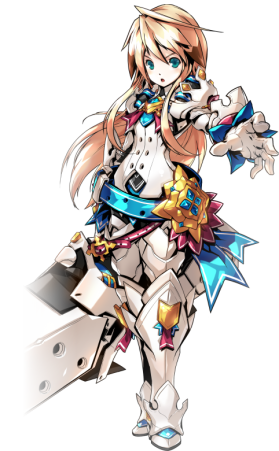 Chung is the heir of the Saker Family, the dynasty entrusted with the protection of Hamel. When demons attacked Hamel, Chung's father was able to repel the onslaught but the dark powers wrested control of his body. He switched sides. Chung tried to stop his father but was seriously injured. The fact that he's still alive he puts down to Elsword and his friends who found him on the battlefield and rescued him. After he had recovered from his injuries, Chung decided to leave his home for a time. He left Hamel in the care of the Red Mercenary Knights, dropped his surname and joined Elsword's group. Now he no longer protects his town but the people that he meets on his travels, training incessantly so he can grow ever stronger. Woe to the demons when he returns to free Hamel – and save his father!

At first I thought: this kid wants to protect others?! First he needs to take his nappy off! But then I saw what he can do with that cannon... Since then I've been happy that he's fighting on our side.